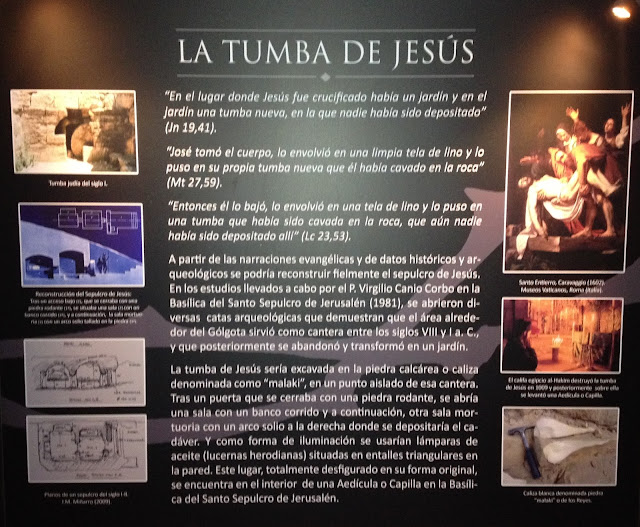 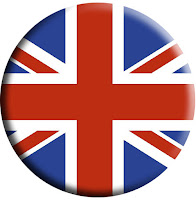 ‘At the place where Jesus was crucified, there was a garden, and in the garden a new tomb, in which no one had ever been laid’. (John 19:41).

‘Joseph took the body, wrapped it in a clean linen cloth, and placed it in his own new tomb that he had cut out of the rock’. (Matthew 27:59).

‘Then he took it down, wrapped it in linen cloth and placed it in a tomb cut in the rock, one in which no one had yet been laid’. (Luke 23:53).
Jesus’s sepulchre could be accurately rebuilt thanks to evangelical narratives and historic and archaeological pieces of information. Professor Virgilio Canio Corbo undertook researches in the Church of the Holy Sepulchre of Jerusalem (1981) and several trial excavations were carried out. They prove that the area around the Golgotha was used as a quarry between the 8th and the 1st century B.C. Then, the quarry was abandoned and it became into a garden.

Jesus’s tomb would be cut out of the limestone known as ‘meleke’, in an isolated place of that quarry. There was a door closed by a rolling stone. Behind this door there was a room with a continuous bench and then a mortuary room could be found, with an arcosolium on the right side, which was the place where the corpse would be laid. Oil lamps (clay lamps) were used in order to light these areas. The lamps would be hung on the walls. Jesus’s tomb is totally distorted from its original shape. Nowadays, it is located inside of an aedicula or a Chapel in the Church of the Holy Sepulchre of Jerusalem.

Reconstruction of the Jesus’s Sepulchre: There was an entrance (1) closed by a rolling stone (1st). Behind the door there was a room (2) with a continuous bench (2nd) and then a mortuary room (3) could be found, with an arcosolium stone sculpted (3rd).

The Egyptian caliph al-Hakim destroyed Jesus’s tomb in 1009. Then, an Aedicula or Chapel was erected there.

THE MAN OF THE HOLY SHROUD 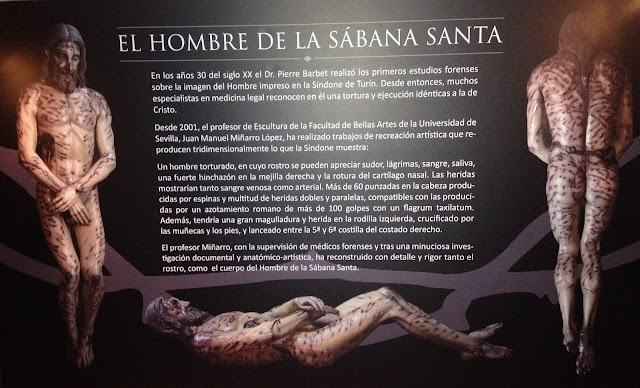 Doctor Pierre Barbet carried out the first forensic studies about the image of the Man in the Holy Shroud of Turin in the 1930s. Since then many experts on legal medicine recognise that the signs of torture and execution are identical to those which Christ suffered.

Since 2001 Juan Manuel Miñarro López, professor of Sculpture at the Faculty of Fine Arts of the University of Seville, has made artistic recreation labours which reproduce in a three-dimensional way the features the Holy Shroud shows:

A tortured man whose face has a strong swelling on the right cheek and the nasal cartilage is broken. There are sweat, tears, blood and saliva. The wounds show venous blood as well as arterial blood. There are more than 60 pricks in the head caused by thorns and many double and parallel wounds which could be provoked by more than 100 blows using a flagrum taxilatum. Furthermore, there is a great bruise and a wound on the left knee. The man was crucified using nails which went through his wrists and his feet. He was also speared on the right side between the 5th and the 6th rib.

Professor Miñarro has reconstructed the face and the body of the Man of the Holy Shroud in detail, under the supervision of coroners and after a documentary, artistic and anatomical research.
Publicado por fundacion aguilar y eslava en 3:29 No hay comentarios: 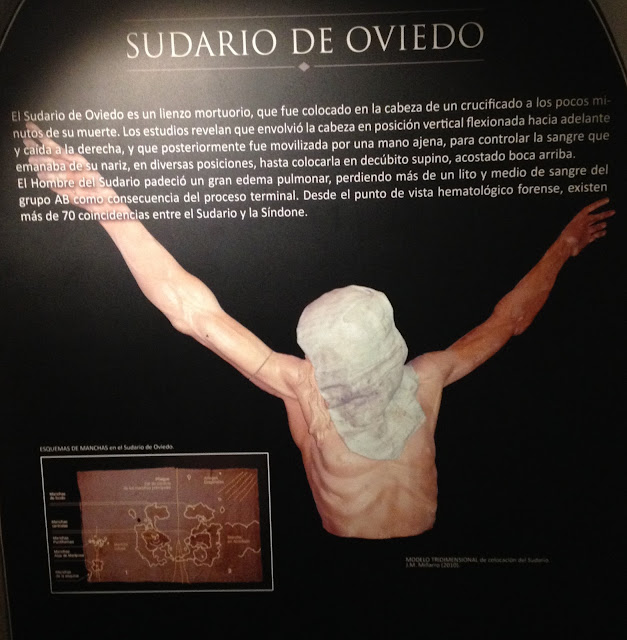 The holy Sudarium of Oviedo is a funerary linen which was wrapped around the head of a crucified person a few minutes after his death. Researches show that the head was in a vertical position slightly bent forward and right. Then, it was moved by a foreign hand in order to control the blood which flowed from the nose. They put the head in supine position. The Man of the Sudarium suffered a great pulmonary oedema and lost more than one and a half litre of blood type AB as a consequence of the terminal process. According to the forensic haematology, there are more than 70 coincidences between the Sudarium of Oviedo and the Holy Shroud.

THREE-DIMENSIONAL MODEL of the positioning of the Sudarium. Juan M. Miñarro (2010) 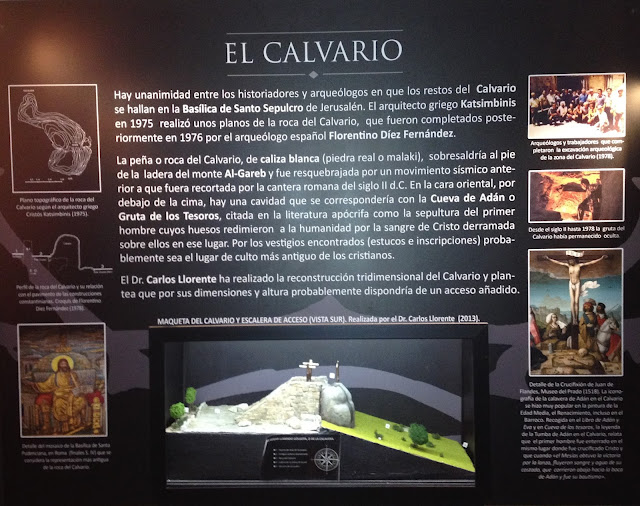 Historians and archaeologists agree that the remains of the Calvary are in the Church of the Holy Sepulchre in Jerusalem. Maps of the Calvary rock were made by the Greek architect Katsimbinis in 1975. Then, Florentino Díez Fernández, a Spanish archaeologist, completed these maps in 1976.

The Calvary is a white limestone (real stone or meleke) which stood above the slope of mount al-Gareb. It was cracked due to a seismic tremor before its use as a Roman quarry in the 2nd century AD. There is a cavity known as the Cave of Adam or Treasures Cave under the summit, in the eastern face. This cavity is mentioned in the apocryphal literature as the grave of the first man whose bones redeemed the humanity with the Christ’s blood spilt over them in that place. It is probably the most ancient place of Christian worship due to vestiges found there (stuccos and inscriptions).

Doctor Carlos Llorente has made a three-dimensional reconstruction of the Calvary. He says that it would probably have an additional access due to its dimensions and height.

Topographic map of the Calvary rock by the Greek architect Cristós Katsimbinis (1975).

Calvary rock profile and its connection with the paving of the Constantinian buildings. Sketch by Florentino Díez Fernández (1978).

Detail of the mosaic of the Basilica of Santa Pudenziana in Rome (end of the 4th century). It is considered the most ancient representation of the Calvary rock.

Archaeologists and workers who completed the archaeological excavation of the Calvary area (1978).

The cave of the Calvary had been hidden from the second century to 1978.

Detail of the Crucifixion by Juan de Flandes, Museo Nacional del Prado (1518). The iconography of Adam’s skull became very popular in the painting in the Middle Ages, the Renaissance and even the Baroque. The legend of Adam’s grave in the Calvary is described in the Book of Adam and Eve and the Treasures Cave. It relates that the first man was buried in the same place where Christ was crucified, and it tells when ‘the Messiah obtained the victory wounded by the spear, blood and water flowed from his side to Adam’s mouth and that was his baptism’.
Publicado por fundacion aguilar y eslava en 3:53 No hay comentarios: 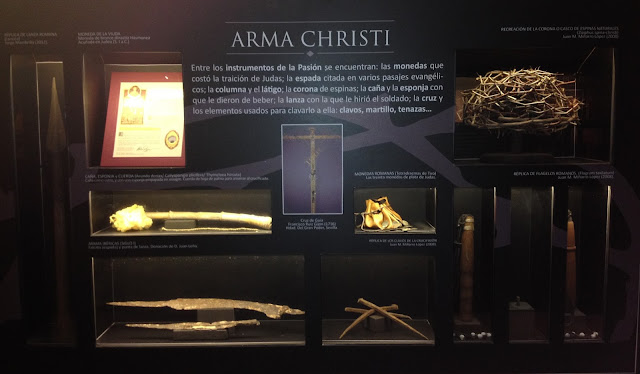 Some of the tools used in the Passion of Christ: the coins used by Judas to betray Jesus; the sword which is mentioned in the Gospels; the column and the whip; the crown of thorns; the reed and the sponge used to drink; the lance which provoked the wound on the side; the cross and the elements used for crucifying Jesus: the nails, the mallet, the pincers…

COPY OF THE NAILS USED FOR THE CRUCIFIXION
Juan M. Miñarro López (2008)